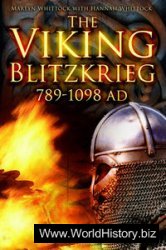 Author: Martyn Whittock, Hannah Whittock
The Viking Blitzkrieg AD 789-1098
The History Press
2013
ISBN: 0752467999
Format: PDF
Size: 5,3 МБ
Language: English
Pages: 447
This book explores the impact of the Viking Wars on England between the first recorded attack in AD 789 and the last major Scandinavian interventions in the late eleventh century, with a few stray events occurring even later than this.
This book argues that without the Viking Wars there would have been no united England in the 10th century, no rise of the Godwin family and their conflict with Edward the Confessor, no Norman connection, no Norman Conquest and no Domesday Book.
The wars and responses to them accelerated economic growth; stimulated state formation and an assertive sense of an English national identity; created a hybrid Anglo-Scandinavian culture that spread beyond the so-called Danelaw; and caused an upheaval in the ruling elite.