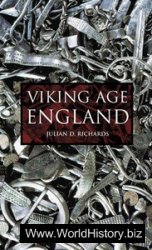 Author: Julian D. Richards
Viking Age England
The History Press
2013
ISBN: 0752428888
Format: PDF
Size: 5,1 МБ
Language: English
Pages: 249
This book is about the development of Anglo-Saxon England from AD 800 until the Norman Conquest. It is an introduction to the subject of the Vikings in England.
From shortly before AD 800 until the Norman Conquest, England was subject to raids from seafaring peoples from Scandinavia—the Vikings. However, they were not only raiders but also traders and settlers. Using the latest archaeological evidence, the author reassesses the Viking contribution to Late Anglo-Saxon England and examines the creation of the new mixed Anglo-Scandinavian identity.