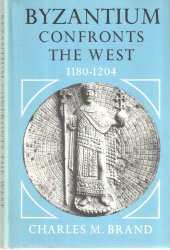 Author: Charles M. Brand
Byzantium Confronts the West, 1180-1204
Harvard University Press
1968
Format: PDF
Size: 18,7 МБ
Language: English
Pages: 416
At the death of emperor Manuel I Comnenus in 1180, the Byzantine Empire appeared to be a solidly constructed state; in 1204, barely a quarter century later, Constantinople fell to the forces of the Fourth Crusade. Brand analyzes the internal and external pressures which beset Byzantium: the tyranny of Andronicus I comnenus, the incapable Angeli emperors, the pressure of Turks and Bulgarians, and especially the onslaught of the vigorous West. Attacks and threats from Normans, Frederick Barbarossa, and his son Henry VI, and eventually the Fourth Crusaders were reinforced by commercial pressure from Venice, Genoa and Pisa.