The Ottomans: Empire of Faith 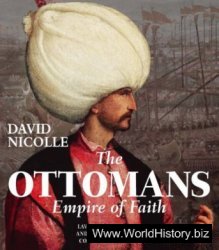 David Nicolle's "The Ottomans" is a lavishly illustrated book & contains 60 specially commissioned Maps and the latter oversees the period from the Romano-Byzantine empire at the death of Justin II AD 578; the Byzantine empire in 1025 at the death of BASIL II,the great Seljuk sultanate and the conquest of ANATOLIA ca 1090 the Mongol invasion of Anatolia in 1243 and so on till the map on page 184 from sultanate-caliphate to republic 1920-1923.
Every period in the conquest of the Ottoman Empire is extremely well depicted in splendid detailed color maps so that the reader has an astonishing clear view of the complicated history of an empire covering 8 centuries.
Besides a good read the reference to the different sites and historical places gives one an oversight never seen in any book so far.