The Career and Writings of Demetrius Kydones: A Study of Fourteenth-Century Byzantine Politics, Religion and Society 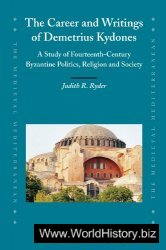 Author: Judith R. Ryder
The Career and Writings of Demetrius Kydones: A Study of Fourteenth-Century Byzantine Politics, Religion and Society
Brill Academic Publishers
ISBN: 9004185658
2010
Format: PDF
Size: 41,0 МБ
Language: English
Pages: 295
The second half of the fourteenth century was a period of rapid change in the Eastern Mediterranean, principally due to the expansion into Europe of the Ottoman Turks. Demetrius Kydones was one of the key Byzantine political and intellectual figures of the time, and his writings are regarded as one of the most important sources for study of the period. Kydones’ career spanned at least four decades, from the 1340s to the 1380s. A Latin scholar, influenced in particular by the writings of Thomas Aquinas (some of which he translated into Greek), Kydones was a leading advocate of improvement of relations between Byzantium and the Latin West as crucial to Byzantine survival. This book examines Kydones’ career and writings, investigating how they can contribute to developing a nuanced understanding of Byzantine political and cultural developments in these years of crisis.