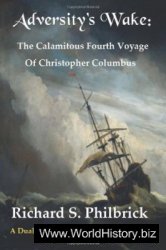 Everyone knows of Columbus’s history-changing voyage of 1492. Few know he made three others to what became known as the “New World.” His fourth, and final, voyage was the stuff of fiction. The Admiral of the Ocean Sea battled hurricanes, constant storms and contrary currents. He fought pitched battles with the indigenous tribes in what is now Panama where he had to abandon two of his ships. Attempting to reach Santo Domingo in vessels barely afloat the adventurers were marooned on Jamaica. Two of the crew and a handful of Indians made a daring open-ocean journey in dugout canoes across the Windward Passage to bring word of their companion’s fate. Half of the marooned crew mutinied eventually leading to a bloody confrontation between shipmates. The author created a fictional narrator and a young orphan who made the journey in order to tell the story of this epic sea adventure. Two young students at the Universidad Latina in David, Panama, Stephany Peñaloza and Deyreth García, chose to translate this book while working towards their degrees in English language studies. This book is intended for Spanish-speaking students studying English. The English text is presented in BOLD text followed immediately by the Spanish translation in ITALICS. This unique formatting allows the reader’s eye to easily follow the story in English and then, if needed, check their comprehension by reading the Spanish translation.