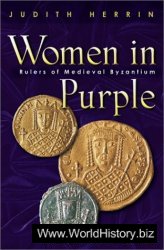 Author: Judith Herrin
Women in Purple Rulers of Medieval Byzantium
Princeton University Press
ISBN: 0691117802
2004
Format: EPUB
Size: 6,2 МБ
Language: English
Pages: 288
In the eighth and ninth centuries, three Byzantine empresses--Irene, Euphrosyne, and Theodora--changed history. Their combined efforts restored the veneration of icons, saving Byzantium from a purely symbolic and decorative art and ensuring its influence for centuries to come.
In this exhilarating and highly entertaining account, one of the foremost historians of the medieval period tells the story of how these fascinating women exercised imperial sovereignty with consummate skill and sometimes ruthless tactics. Though they gained access to the all-pervasive authority of the Byzantine ruling dynasty through marriage, all three continued to wear the imperial purple and wield tremendous power as widows. From Constantinople, their own Queen City, the empresses undermined competitors and governed like men. They conducted diplomacy across the known world, negotiating with the likes of Charlemagne, Roman popes, and the great Arab caliph Harun al Rashid.