Castles in Ireland: Feudal Power in a Gaelic World 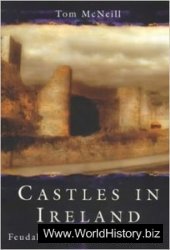 Author: T.E. McNeill
Castles in Ireland: Feudal Power in a Gaelic World
Routledge
ISBN: 0415165377
2005
Format: PDF
Size: 25,2 МБ
Language: English
Pages: 280
The castles of Ireland are an essential part of the story of medieval Europe, but were, until recently, a subject neglected by scholars. A lord's power and prestige was displayed in the majesty and uniqueness of his castle. The remains of several thousand castles enable us to reconstruct life in Ireland during these crucial centuries.
Castles in Ireland tells the story of the nature and development of lordship and power in medieval Ireland. Ireland formed the setting to the interplay of the differing roles of competing lordships: English and Irish; feudal European and Gaelic; royal and baronial. Tom McNeill argues that the design of the castles contests the traditional view of Ireland as a land torn by war and divided culturally between the English and Irish.