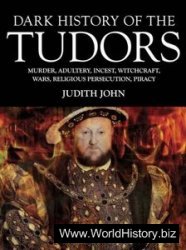 Author: Judith John
Dark History of the Tudors: Murder, Adultery, Incest, Witchcraft, Wars, Religious Persection, Piracy
Amber Books Ltd
ISBN: 178274133X
2014
Format: EPUB
Size: 12.4 МБ
Language: English
Pages: 338
Divorced, beheaded, died,
Divorced, beheaded, survived.
– the fates of Henry VIII’s wives
Beginning with the victory of Henry Tudor over Richard III at Bosworth Field in 1485, and ending with the death of the childless Elizabeth I in 1603 following a 45-year reign, the Tudor dynasty marks a period in British history where England was transformed from a minor medieval kingdom to a preeminent European power on the verge of empire.
Yet this period of great upheaval had a dark side: Henry VIII’s notorious break with the Roman Catholic Church and his divorce or execution of four of his six wives; the sad story of teenaged Lady Jane Grey, who was monarch for just nine days before being executed in favor of the Catholic Mary I; and Queen Elizabeth I, who defeated the Spanish Armada, suppressed the Irish rebellion, and sponsored pirates and slave traders in the quest for new territories in America.
Illustrated with 180 photographs, paintings, and illustrations, Dark History of the Tudors is a fascinating, accessible account of the murder, adultery, and religious turmoil that characterized England’s most infamous royal dynasty.