Empire of the Islamic World 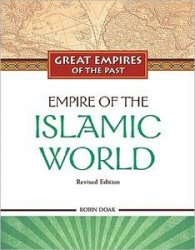 Author: Robin S. Doak
Empire of the Islamic World (Great Empires of the Past)
Chelsea House Publications
2010
ISBN: 1604131616
Format: PDF
Size: 15,2 МБ
Language: English
Pages: 144
While Europe was in the Dark Ages, classical learning from ancient Greece, Rome, and Persia was being preserved and advanced in Islamic libraries and universities. From 632 to 1258, the Islamic Empire was the most powerful and cultured domain in the world.
Less than a century after its founding, the empire had grown from a loose confederation of desert tribes into the largest empire in the history of the world, larger than the mighty Roman Empire at its peak. "Empire of the Islamic World, Revised Edition" opens with a brief summary of the Islamic Empire, and gives a sense of the world and geographic area in the years leading up to the empire. The book continues by exploring the empire's society, culture, and daily life including architecture and art; astronomy and mathematics; customs, holidays, sports, and foods; government systems; industry and trade; language and literature; military structure and strategy; and, mythology and religious beliefs.