British Fortifications Through the Reign of Richard III: An Illustrated History 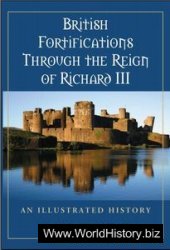 From the time the Romans first set foot on England's shore in 55 BC, the British Isles have faced a constant threat of foreign invasion. As a result, the landscapes of England, Scotland, and Ireland are dotted with ancient defensive fortifications as varied as their makers. Iron Age Celtic "hillforts," Roman castra and Hadrian's Wall, Anglo-Saxon dykes and Alfredian burhs, Norman mottes and stone-keeps, Edwardian castles, Irish tower houses they all served to repel ancient intruders and many still stand as tangible relics of a remarkable past. This study chronicles the development of British fortifications from prehistoric times through the end of Richard III's reign in 1485, providing the history of each type of structure, relevant examples, and information on weapons and siege warfare. More than 250 illustrations vividly detail each ediface's construction and configuration.