Genghis Khan: Conqueror of the World 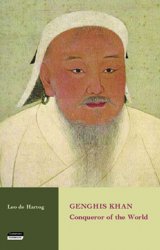 Genghis Khan's armies breached the Great Wall of China, captured Beijing, and crushed all resistance in Afghanistan, Persia and Southern Russia by ruthless massacres and pillage. His armies also invaded Europe. Yet until now no historically reliable book about him has been written for a popular audience. This book analyses how Genghis Khan was able to unite the primitive Mongol tribes of the harsh Siberian steppes and organize them into highly mobile and disciplined troops. It shows how he created a regime so strong that his son was able to extend the conquests after the death of Genghis Khan himself. Leo de Hartog pays particular attention to the little-studied Mongol invasion of Europe and explores Europe's contacts with the great Khan.