On the Skirts of Canaan in the Iron Age 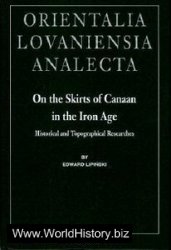 Pages: 479
Format: PDF
Size: 32 mb
Language: english
The history of Canaan in the Iron Age is generally written from the perspective of the kingdoms of Israel and Judah. The scope of this book is to inverse this relation and to focus on "the skirts of Canaan", while regarding the "United Monarchy" and the "Divided Monarchy" as external and sometimes marginal players of the regional history. After having examined the transition from the Late Bronze Age to the Iron Age in the mid-12th century B.C., the book deals thus with the Philistines and the role of Egypt in Canaan during Iron Age II, especially in the face of the Assyrian expansion. It treats further of the Phoenicians and the Aramaeans. There follow five chapters on Bashan, Gilead, Ammon, Moab, and Edom with the Negeb. Several indices facilitate the consultation of the work on particular topics.