In the Footsteps of William Wallace: In Scotland and Northern England 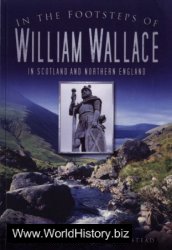 For nearly 700 years debate has raged over the true nature of William Wallace and his role in Scotland's turbulent history. Was he the 'Braveheart' of Blind Harry's legendary account, the bold, but savage hero of the Scottish wars? Or, as some contemporary chroniclers attested, nothing but a villainous thief and vagrant fugitive? This book draws on a wide range of contemporary and modern sources to look behind the figure of legend to find Wallace's true character. These superb photographs trace Wallace's life from his modest upbringing in south-west Scotland to his remarkable victory as a 'guerilla' leader and military commander at Stirling Bridge, and to his eventual betrayal, capture and painful execution seven years later. This is an essential travel companion for a journey through the landscapes and places associated with Wallace in Scotland and Northern England, and a vibrant new insight into the reality of Scotland's most famous battlefield hero.