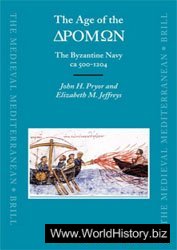 This volume examines the development and evolution of the war galley known as the Dromon, and its relative, the Chelandion, from first appearance in the sixth century until its supercession in the twelfth century by the Galea developed in the Latin West. Beginning as a small, fully-decked, monoreme galley, by the tenth century the Dromon had become a bireme, the pre-eminent war galley of the Mediterranean. The salient features of these ships were their two-banked oarage system, the spurs at their bows which replaced the ram of classical antiquity, their lateen sails, and their primary weapon: Greek Fire.
The book contextualizes the technical characteristics of the ships within the operational history of Byzantine fleets, logistical problems of medieval naval warfare, and strategic objectives.