Templars And The Freemasons 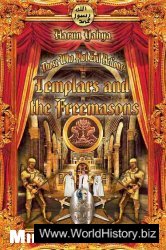 Author: Harun Yahya
Templars And The Freemasons
GLOBAL PUBLISHING
2007
Format: PDF
Size: 3,88 mb
Language English
The Knights of the Temple—or Templars, for short—an organization that arose in the Middle Ages, but whose activities and supporters changed over the course of time. The Knights Templar first emerged after the First Crusade, rapidly adopted a political identity and became one of the greatest financial powers of the ages.
Initially portraying themselves as devout, they made use of the prestige and esteem they thus acquired. But statements from the Templar trials that began in 1327 revealed the organization’s true face: Shortly after its formation, it had adopted a form of satanic teaching and also acquired one of the greatest fortunes in Europe.
How did the Templars amass this financial power? How vast was their wealth? And now, who controls that sinister fortune they amassed, and to what ends is it being used?
To answer these questions, this book reconsiders the Knights Templars—whose history was dealt with in our earlier book on the subject—and their successors, the Freemasons, and shows how the Templars continue to be financed by illicit funds.