Empire of the Mongols 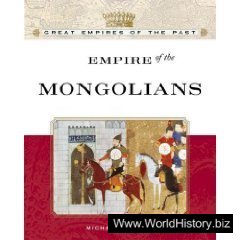 Author: Michael Burgan
Empire Of The Mongols
Facts on File
2005
Format: Pdf
Size: 8,81 mb
Language: English
Great Empires of the Past
FOR SEVERAL THOUSAND YEARS WARRIORS ON HORSEBACK rode across central Asia, conquering nearby towns and cities. These horsemen lived on the steppes, a flat, grassy region that extends from Asia into central Europe. The riders were nomads, moving from one grazing
spot to another with their herds of horses, sheep, camels, goats, and cattle. Over the centuries these nomads battled such people as the ancient Greeks, the Romans, the Persians, the Chinese, and the Arabs. Of all the nomadic warriors of central Asia, the fiercest were the Mongols.