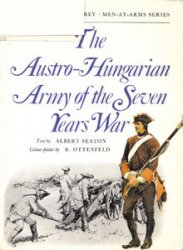 Author: Albert Seaton
Osprey - Men at Arms 6 - The Austro-Hungarian Army of The Seven Years War
Osprey Publishing
ISBN: 0850451493
1973
Format: PDF
Size: 21,3 МБ
Language: English
Pages: 48
This book traces the development of the dominance of the Austrian hapsburgs in eastern Europe as they established themselves as eventual rulers of Austria, Hungary, Bohemia, Moravia, and Silesia. The latter was the setting for severe fighting as the Austro-Hungarian army tried and failed to resist Prussian attempts to seize the region. The Seven Years War pitted Fredrick the Great of Prussia against Maria Theresa of Austro-Hungary as each struggled for control of their respective empires and dominance of the continent. The organisation, uniforms and equipment of the army is examined and illustrated.