God Save Catalonia: England’s Intervention in Catalonia During the War of the Spanish Succession 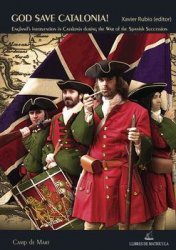 The War of the Spanish Succession (1701–1714) was a major European conflict of the early 18th century, triggered by the death in 1700 of the last Habsburg King of Spain, the infirm and childless Charles II. He had ruled over a large active empire which spanned the globe, and the question of who would succeed him had long troubled ministers in capitals throughout Europe. Attempts to solve the problem by partitioning (dividing) the empire between the eligible candidates from the royal Houses of France (Bourbon), Austria (Habsburg), and Bavaria (Wittelsbach) ultimately failed, and on his deathbed Charles II fixed the entire Spanish inheritance on Philip, Duke of Anjou, the second-eldest grandson of King Louis XIV of France. With Philip ruling in Spain, Louis XIV would secure great advantages for his dynasty, but some statesmen regarded a dominant House of Bourbon as a threat to European stability, jeopardising the "Balance of Power".