Napoleon and the Struggle for Germany: The Franco-Prussian War of 1813 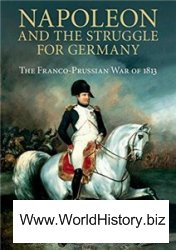 The first comprehensive history of the decisive Fall Campaign of 1813 that determined control of Central Europe following Napoleon's catastrophic defeat in Russia the previous year. Using German, French, British, Russian, Austrian and Swedish sources, Michael Leggiere provides a panoramic history which covers the full sweep of the struggle in Germany.
He shows how Prussia, the weakest of the Great Powers, led the struggle against Napoleon and his empire. By reconstructing the principal campaigns and operations in Germany, the book reveals how the defeat of Napoleon in Germany was made possible by Prussian victories. In particular, it features detailed analysis of the strategy, military operations and battles in Germany that culminated with the epic four-day Battle of Nations at Leipzig and Napoleon's retreat to France. This study not only highlights the breakdown of Napoleon's strategy in 1813, but constitutes a fascinating study in coalition warfare, international relations, and civil-military relations.