The Armada of Flanders: Spanish Maritime Policy and European War, 1568-1668 ) 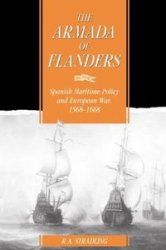 Author: R. A. Stradling
The Armada of Flanders: Spanish Maritime Policy and European War, 1568-1668 )
Cambridge University Press
ISBN: 0521525128
2003
Format: PDF
Size: 8,6 МБ
Language: English
Pages: 268
The Flanders armada, took shape in response to the use of seapower by the Dutch rebels, and evolved into the most effective unit in Spain's defence establishment. In combination with its privateering auxiliaries, this elite striking force dominated the North Sea for some twenty years (1625-45), and campaigned also in the Mediterranean and Atlantic theatres of war. Yet its contribution to the tenacious survival of Spanish hegemony has never before been assessed. A narrative of the armada's fighting record over the century of its meaningful existence is presented with constant reference to the strategic-logistical context and analysis of policymaking in Madrid. Attention is paid to the political significance of maritime policy, and particularly the relationship between Madrid and its subordinate headquarters in Brussels; the infrastructure of the armada; the ships themselves, above all the revolutionary but elusive 'frigate'; the social hierarchy of crews and commanders; and details of administration and financing.