Touched With Fire: Five Presidents and the Civil War Battles That Made Them 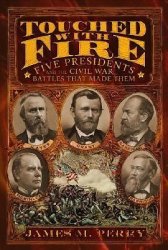 They were the "greatest generation " of the nineteenth century -the Civil War heroes whose exploits took them all the way to the White House. "In our youth our hearts were touched with fire. " So said Oliver Wendell Holmes, Jr. , the future Supreme Court justice, about his fellow veterans of the Civil War. The 1860s were a time much like the 1940s, when a generation of idealistic young Americans answered their country 's call, and many made the supreme sacrifice to preserve freedom and liberty for all. And among the two million "boys in blue " were five soldiers whose wartime heroics would take them into national politics -a ride that would lead, in time, to the White House. In Touched with Fire , James M. Perry reintroduces us to these five men -Ulysses S. Grant, Rutherford B. "Ruddy" Hayes, James A. "Jamie " Garfield, Benjamin "Little Ben " Harrison, and William "Mack " McKinley -who rose to the pinnacle of American life but are now largely forgotten. Drawing on diaries, letters, and other first-hand accounts, Perry recreates the battles that brought them fame and extols the courage that made them extraordinary leaders, especially under fire. The Civil War was their finest hour, and their stories form a vivid reminder of what a truly great generation can accomplish.