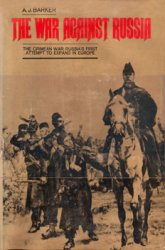 The Crimean War is remembered principally because of a cavalry charge, the heroism of one woman, and the fact that the British generals' names—Raglan and Cardigan—passed into the language as articles of clothing. A whimsical reflection, perhaps, on where their real talents lay. A. J. Barker has written a witty and wise account of that vexing and perplexing war. Here we have the confrontation of the super-powers over the ramshackle Turkish Empire headed by a young sultan so debilitated by sexual excesses that he was hardly capable of coherent thought. Representing France was the quick tempered. one-armed General d'Hilliers. from Russia came Prince Menschikoff , whose attitude toward the Turks was, to say the least, colored by the fact that he had been emasculated some years before by gun fire from Turkish troops. The British were already solidly entrenched in Turkey. At issue, presumably, was the question of who would protect the Christians in the Ottoman Empire: France, representing the Roman Catholic Church or Russia representing the Orthodox Church. It was a matter of supreme indifference to the sultan—the rivalries in the Holy Land concerned those whom his religion regarded as infidel dogs.