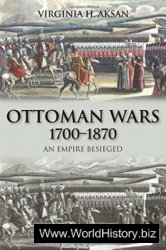 The Ottoman Empire had reached the peak of its power, presenting a very real threat to Western Christendom when in 1683 it suffered its first major defeat, at the Siege of Vienna. Tracing the empire’s conflicts of the next two centuries, The Ottoman Wars: An Empire Besieged examines the social transformation of the Ottoman military system in an era of global imperialism
Spanning more than a century of conflict, the book considers challenges the Ottoman government faced from both neighbouring Catholic Habsburg Austria and Orthodox Romanov Russia, as well as - arguably more importantly – from military, intellectual and religious groups within the empire. Using close analysis of select campaigns, Virginia Aksan first discusses the Ottoman Empire’s changing internal military context, before addressing the modernized regimental organisation under Sultan Mahmud II after 1826.
Featuring illustrations and maps, many of which have never been published before, The Ottoman Wars draws on previously untapped source material to provide an original and compelling account of an empire near financial and societal collapse, and the successes and failures of a military system under siege. The book is a fascinating study of the decline of an international power, raising questions about the influence of culture on warfare.