Frederick the Great, King of Prussia 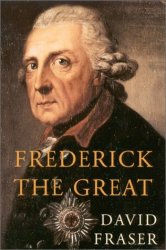 The military genius of his age, Frederick the Great has always aroused extreme opinions. Some saw him as "the greatest man who has ever lived", while others have accused him of creating the Prusso ultra-nationalism which culminated in Hitler. But this paternalistic ruler, who once said he wanted nothing more than to be remembered as "Le Rois des greux", the king of the beggars, was also a polymath whose artistic and intellectual abilities amazed 18th-century Europe. David Fraser's biography presents a rounded portrait of this extraordinary man.