Frederick the Great - A Profile 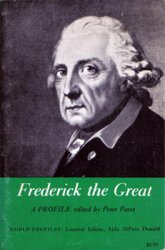 To those contemporaries who knew him best and were not overawed by him, Frederick appeared as a man of almost inexplicable contradictions. His character, the British ambassador reported in a dispatch in 1776, was strongly marked by a "motley composition of barbarity and humanity." On a visit to Potsdam three years earlier, Count Guibert, the military oracle of the waning ancien regime, took note of the constant shift from flattery to menace in the king's facial expressions: "He is never the same; one never knows where one stands with him." Guibert carried away the impression of a profoundly ambiguous personality, which he found confirmed even in such details as the king's costly snuffboxes, "which contrast strangely with his general simplicity."