The Making of Frederick the Great 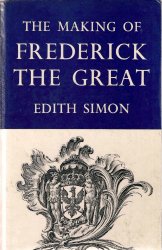 Frederick II of Prussia, called the Great, was once a national hero by adoption in England—partly because the Colonial War was won as much on the battlefields of Frederick's third Silesian or Seven Years War (i 756-1 763) as in America, partly for the heroic spectacle of little Prussia's lone stand against a coalition of the three mightiest powers in Europe (France, Austria, Russia), and partly because of the appeal of his wry, multi-faceted personality. His fame was world-wide, and traces of his cult appeared in places as remote from context as the Algerian interior.