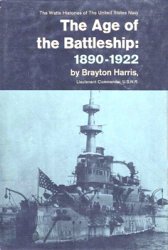 In the years following the Civil War, ignorance, indifference, and corruption left such a mark on the U. S. Navy that the entire fleet of the 1880s could have been defeated by any single modern warship of the day. It was to take years of often-acrimonious wrangling to re-build the sorry fleet-but despite factional disputes and political bumbling, the Navy rose in strength and efficiency until, by 1922, it was second to none in the world. The Age of the Battleship tells the tale and, along the way, reminds us: that the United States Navy helped introduce submarines and airplanes to naval warfare; that a racially integrated Navy became segregated-and then integrated, again; that too many Members of the Congress are more interested in pork than progress . . . and includes stories of the Navy's success in two wars-the largely naval war against Spain, 1898, and the sea, air, and land war (with the Navy's Marine Corps at the front) against Germany, 1918. It also tells the tale . . . more than any other . . . of the Navy's frequent wars against itself.