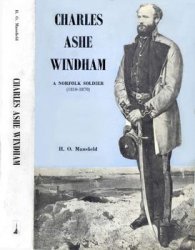 This is a combination of diary and letters expanded with historical narrative. Almost all the text deals with the Crimean War, in which Windham served as on the staff in the 4th Division. He played a leading role in the attack on the Redan in 1855. Of persons mentioned, the important historical figures are identified in an appendice, but the minor ones appear not to have been researched at all. About one-third of the text is Windham's own writing, with rest as background and explanation. Windham's opinions were that too many of the British commanders were inept and ineffective, with the price being paid by the soldiers in the ranks.