At the Edge of Empire: The Terek Cossacks and the North Caucasus Frontier 1700-1860 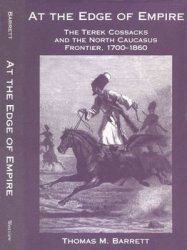 At the Edge of Empire examines the history of the Cossack frontier settlements in the North Caucasus during the eighteenth and nineteenth centuries. The specific focus is the Terek Cossacks, frontier settlers along the Terek river who became servants of the Russian state, warriors, and occasionally soldiers for (and deserters from) the Russian imperial armies. These were the most "Cossack" of all the Cossacks in the empire. Conditions of Cossack service and settlement along the Terek were unlike those on other ends of the empire.