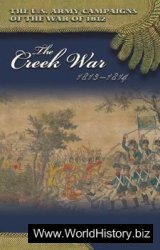 About a year after the United States declared war on Great Britain in June 1812, a conflict erupted in the American South that would become known as the Creek War. The Creek War was a complicated affair. It was both a civil war between two factions within the Creek Nation and an international struggle in which the United States, Spain, Britain, and other Indian tribes played a part. America’s ultimate victory in the conflict helped shape the outcome of the broader war with Britain and gained significant new territory for white settlement in the American South.