The Tide: of War The 1814 Invasions of Upper Canada 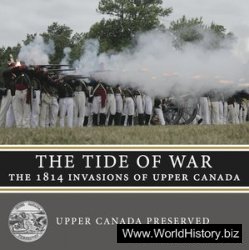 Throughout 1812 and 1813, Upper Canada had been the principle target for a succession of American invasions and attacks. Fortunately they all had been repulsed, but at a high cost in lives and the devastation of property on both sides of the border. By the beginning of 1814, both sides were determined to bring the war to an end with a decisive victory through an escalated commitment of men and military resources. Continuing the story already detailed in The Call to Arms, The Pendulum of War, and The Flames of War, The Tide of War documents the first six months of 1814 and the ongoing fight for the domination and control of Upper Canada.