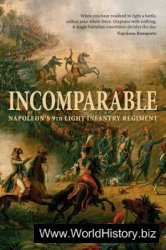 An elite battalion under Louis XVI, the 9th Light Infantry regiment were with Napoleon from almost the beginning, turning the field at Marengo and breaking the Austrians. They then spent over a decade fighting their way across the continent, following Napoleon to the bitter end. Bringing their Eagle out of hiding when Napoleon returned from exile in 1815 they almost saved the day again, at Waterloo, spearheading a charge to rejoin Napoleon.