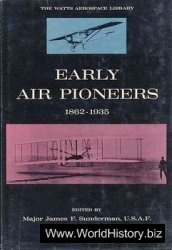 In this first title of The Watts Aerospace Library, Major James F. Sunderman has selected the most significant the pioneer age of aviation, 1862-1935. Here is the saga of the balloon reconaissance in the Civil War; the amazing achievement of flying a heavier-than-air plane; the first war in the air. World War I, with its intrepid flyers and pilot duels; the amazing stunts of madcap "barnstormers" of the 'twenties and 'thirties; the story of "flying the mail by air"; the tragic fate of the ill-starred dirigible Akron; the lonely vigil of Lindbergh's solo Atlantic flight. These and many more of our early air pioneers are here given the salutes they so greatly earned.