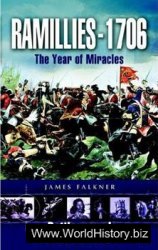 On Sunday 23 May 1706, near the village of Ramillies in modern Belgium, the Anglo-Dutch army commanded by John Churchill, 1st Duke of Marlborough, inflicted a devastating defeat on the French army of the Duke de Villeroi. Marlborough's triumph on that day ranks alongside Blenheim as one of the great feats of his extraordinary military career. The French army was shattered physically and morally and, as a result, Marlborough's army overran almost all of the Spanish Netherlands in the next six weeks, and gained an unshakeable advantage over the armed might of Louis XIV's France during the long War of the Spanish Succession.