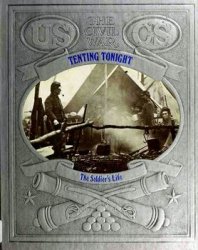 This is primarily a social, not a military, history that focuses on five broad topics: How the Northern and Southern armies were recruited, especially at the very beginning of the conflict, and what the results were of all those amateur soldiers and officers stumbling around and bumping into each other; what life was like in camp on both sides; the crushing effects of disease from lack of sanitation and the bleak future of those who suffered serious wounds; the plight of the P.O.W., especially of captured Confederates under the thumb of vengeful Northern officers (Andersonville gets the bad press but Elmira was at least as bad, and worse in the winter); and the role of religion and the chaplain in the life of the soldier. There are additional vignettes of pickets on opposite sides sharing their coffee and tobacco, the fate of condemned deserters, the popularity of baseball as an antidote to boredom, and the shock and aftershock on the men in battle. Throughout the book there are many quotes from letters and later memoirs, and -- of course -- many, many fascinating photos. Very highly recommended.