The Bloodiest Day - The Battle of Antietam 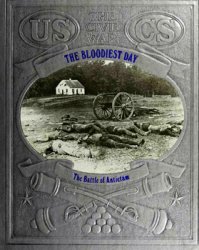 This volume in the Time-Life Civil War series looks at the events following the Second Battle of Bull Run, during which Lee squared off against McClellan again as the Confederates mounted their 1862 invasion of Maryland. This battle would be particularly bloody and would result in the greatest loss of life in a single ever suffered by American soldiers. Bloody sites such as the Cornfield, Dunker Church and Bloody Lane would enter American history as some of the darkest points of our story. The battle would serve to highlight the inability of the Confederacy to mount an effective campaign on northern soil but it would also bring to light the continuing problem of Yankee leadership of its armies. Another great book in the series, well-written and illustrated with period photos, maps, artwork and photos of artifacts. Sidebars include an artist's view of the battle, photos of Harper's Ferry, The Making of a Union Heroine and Gallery of the Dead.