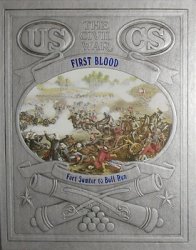 This book follows the Civil War, from the April surrender of Fort Sumter to the skirmishes and other events which led to the First Battle of Bull Run in July 1861. This volume looks at the opening moves by both sides in the Eastern Theater, when the North and the South both thought the war would be a short one. Units were organized from scratch and both sides had to move untried troops to where the first battles would be fought... Well-written and well-illustrated this is an excellent book on the events leading to the first large-scale battle of the Civil War. Includes sidebars on early enlistments in the North, imaginative renderings of the Manassas battle, photos of soldiers taken before the first shedding of fled, weapons, and Ellsworth, the North's first martyr.