Atlas of Battles: Strategy and Tactics, Civil War to Present 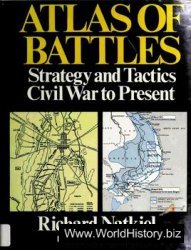 Atlas of Battles is an important guide and reference to the most influential military actions that have taken place since the American Civil War. The complicated sequences of movements that make up a military campaign or battle can only be understood properly if accompanied by clear and informative maps. Certainly no military officer would think a briefing was complete without detailed reference to maps yet many books of military history are published with few maps or sometimes none at all. Atlas of Battles therefore fills an important gap in the library of the military enthusiast. Richard Natkiel's carefully drawn maps are supplemented by an authoritative commentary and selected historical photographs which can also provide the younger reader with a reliable introduction to the dramatic events in such decisive conflicts as World Wars I and II or the Middle East and Vietnam Wars. Atlas of Battles is a valuable addition to the library of any student of military history.