The Prussian Army of the Lower Rhine 1815 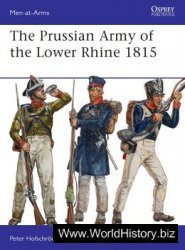 The Prussian Army of the Lower Rhine, led by Blücher in 1815, played a crucial part in the Allied victory at Waterloo, and was involved in intense fighting at Wavre and Ligny. Delving into original sources, including eyewitness accounts and regimental histories known only to German scholars, this book tells the story of the soldiers on the ground: how they were organised and drilled, their previous service; their march to the battlefield; and what they did when they got there.