The Fall of Napoleon: The Final Betrayal 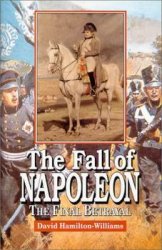 A study of the cause and effects of Napoleon's removal from power and his subsequent murder in 1821. The diplomatic intrigue between Britain, Austria, Russia and Prussia is interwoven with the military campaigns of 1813-15, and the deception which aided in Napoleon's ultimate demise.