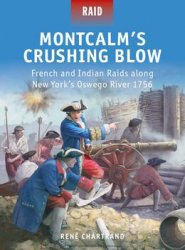 The year 1755 saw the rivalry between Britain and France in North America escalate into open warfare as both sides sought to overcome the other’s forts and trading posts. Lord Loudoun and the Marquis de Montcalm were sent out to lead their forces and Montcalm was soon tasked with capturing the formidable Anglo-American post at Oswego. Montcalm’s 3,000-strong force surrounded the forts at Oswego and soon forced the defenders to surrender – an outstanding French success. Featuring specially commissioned full colour artwork, expert analysis, and lively narrative, this engaging study casts light on a daring feat of arms at the height of the French and Indian War.