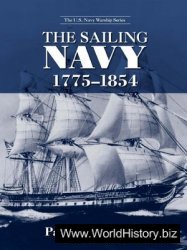 The Sailing Navy, 1775-1854 (The U.S. Navy Warship Series)
Author: Paul Silverstone
Routledge
ISBN: 0415978726
2006
Pages: 122
Format: PDF
Size: 5.16МБ
Language: English
The Sailing Navy, 1775-1854, the first volume in the definitive five-volume U.S. Navy Warship series, comprehensively details all aspects of the ships that sailed in the nascent stages of the U.S. Navy. From its beginnings as battlers of Barbary Coast pirates, to challenging the awesome might of the Royal Navy in the War of 1812, to the historic blockade that proved instrumental in winning the Mexican-American War, the sailing ships foreshadowed the daring and resolve of the later U.S. Navy. With its all-inclusive lists of data, The Sailing Navy is the most in-depth resource available on the ships that shaped the early history of the U.S. Navy.