The First Battle of Manassas 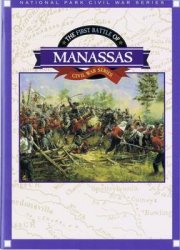 The First Battle of Bull Run, also known as First Manassas (the name used by Confederate forces), was fought on July 21, 1861, in Prince William County, Virginia, near the city of Manassas, not far from Washington, D.C. It was the first major battle of the American Civil War. The Union forces were slow in positioning themselves, allowing Confederate reinforcements time to arrive by rail. Each side had about 18,000 poorly trained and poorly led troops in their first battle. It was a Confederate victory followed by a disorganized retreat of the Union forces.
Just months after the start of the war at Fort Sumter, the Northern public clamored for a march against the Confederate capital of Richmond, Virginia, which they expected to bring an early end to the rebellion. Yielding to political pressure, Brig. Gen. Irvin McDowell led his unseasoned Union Army across Bull Run against the equally inexperienced Confederate Army of Brig. Gen. P. G. T. Beauregard camped near Manassas Junction. McDowell's ambitious plan for a surprise flank attack on the Confederate left was poorly executed by his officers and men; nevertheless, the Confederates, who had been planning to attack the Union left flank, found themselves at an initial disadvantage.