The Coast Guard Along the North Atlantic Coast 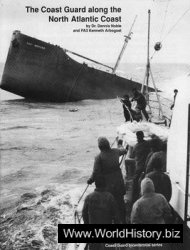 From the craggy coast of Maine, to New Jersey’s sandy beaches, the Atlantic coast is speckled with legends, like sea shells. Legends told by sailors and flatlanders alike, of wonderful sailing ships, fierce blizzards and terrible wrecks; legends that are the lore and lure of the sea.
Storytellers still recount the adventures of the surfmen who braved the gale to rescue to the victims of shipwrecks, or the lonely vigil of the lighthouse keeper. The Revenue Cutters first sailed from New England ports, and their battles against smugglers and pirates are epic.
The first lighthouse in the country was built in Boston, and the first ship of the U.S. Revenue Cutter Services, the Massachusetts, was built in Newburyport, Mass. The federal government built a series of huts along the New Jersey coast to shelter shipwrecked mariners, and the U.S. Life-Saving Service performed its first rescue there in 1850. Those three agencies; the Lighthouse Service, the Life-Saving Service and the revenue Cutter Service were later joined, so in truth, the history of the U.S. Coast Guard began on shores of the North Atlantic.