The Jacobite Wars: Scotland and the Military Campaigns of 1715 and 1745 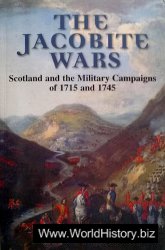 The Jacobite Wars is a detailed exploration of the Jacobite military campaigns of 1715 and 1745, set against the background of Scottish political, religious and constitutional history. The author has written a clear and demythologised account of the military campaigns waged by the Jacobites against the Hanoverian monarchs. He draws on the work of recent historians who have come to emphasise the political significance of the rebellions (which had been dismissed by earlier historians), showing the danger faced by the Hanoverian regime during those years of political and religious turbulence. The Jacobite rebellions of 1715 and 1745 occurred within the context of the 1707 Act of Union, acquiring the trappings of a national crusade to restore Scotland's independence. James Edward Stuart promised consistently to break the Union between Scotland and England if he became King. The rebellions also had great religious significance: the Jacobite cause was committed to restoring a Catholic dynasty to the throne and was therefore supported by the small number of Catholics in the country, and also the Episcopalians, who were together set against the Presbyterians. The failure of the rebellions, culminating in the Battle of Culloden, coincided with the national identity of Scotland becoming associated with Presbyterianism and North Britain. John L. Roberts presents the view that the political vulnerability of Hanoverians would explain the strength of Government reaction to the 1745 rebellion, especially in the Scottish Highlands, and the ferocity of its retribution, which has long been lamented in popular Scottish culture. The Jacobite Wars will appeal to anyone with an interest in the military history of this key period in Scotland's past.