1805: Austerlitz : Napoleon and the Вestruction of the Third Coalition 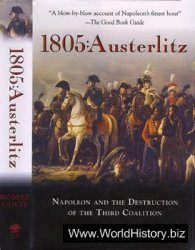 
The Battle of Austerlitz is almost universally regarded as the most impressive of Napoleon's many victories. The magnitude of the French achievement against a larger army was unprecedented. In this insightful new study, the author analyzes the planning of the opposing forces and details the course of the battle hour by hour, describing the fierce seesaw battle around Sokolnitz, the epic struggle for the Pratzen Heights, the dramatic engagement between the legendary Lannes and Bagration in the north, and the widely misunderstood clash of Napoleon's Imperial Guard and Alexander's Imperial Leib-Guard.