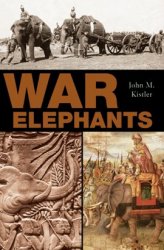 Elephants have fought in human armies for more than three thousand years. Asian powers boasted of their pachyderm power, while the Romans fielded elephants alongside their legendary legions but were, perhaps, too proud to admit that mere animals contributed to victory. Elephants have gored, stomped, and sliced their way through infantry and cavalry with great success. They have also been cut, speared, bombed, and napalmed for their efforts. This is the story of their largely forgotten role in the history of warfare.
Generals throughout recorded history have used elephants as tanks, bulldozers, and cargo trucks long before such vehicles existed. Until gunpowder began to reduce the utility of elephants in battle during the 17th Century, these beasts built roads, swung swords, or simply terrified opposing forces. Although some believe that elephants were mere gimmicks of warfare, Kistler discredits that notion. His book hopes to give elephants the credit they deserve for the sacrifices they have endured. Elephants have long fought for and served human masters, but it is now the elephants themselves that must be protected.