Philadelphia and the Civil War Arsenal of the Union 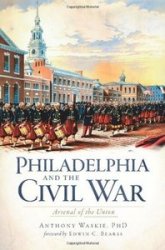 Author: Anthony Waskie, Edwin C. Bearss
Philadelphia and the Civil War Arsenal of the Union
The History Press
2011
ISBN: 1609490118
Format: EPUB
Size: 6,4 МБ
Language: English
Pages: 256
At the outbreak of the Civil War in 1861, Philadelphia was the second-largest city in the country and had the industrial might to earn the title "Arsenal of the Union." With Pennsylvania's anthracite coal, the city mills forged steel into arms, and a vast network of rails carried the ammunition and other manufactured goods to the troops. Over the course of the war, Philadelphia contributed 100,000 soldiers to the Union army, including many free blacks and such notables as General George McClellan and General George Meade, the victor of Gettysburg. Anthony Waskie chronicles Philadelphia's role in the conflict while also taking an intimate view of life in the city with stories of all those who volunteered to serve and guard the Cradle of Liberty.