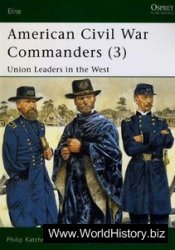 Author: Philip Katcher, Richard Hook
Osprey Elite 89 - American Civil War Commanders (3) Union Leaders in the West
Osprey Publishing
2003
ISBN: 1841763217
Format: PDF
Size: 22,2 МБ
Language: English
Pages: 68
Osrpey's examination of the commanders of the American Civil War (1861-1865). When the War Between the States broke out in 1861, the US Army had only four line generals – and three of those were over 70 years of age and veterans of the Napoleonic period. About one in three of America's professional officers chose to serve the Confederacy, and the government's urgent need to find commanders for its vastly expanded army put stars on the shoulders of men of very varied backgrounds and talents. The trials of war would soon separate the born leaders from the over-promoted and the political opportunists. This second volume devoted to Union generals examines the careers and personalities of 25 commanders whose service was mainly, or at first, in the Western theater of war.